Mark Carney: "We are introducing a new affordability test"

A cap on the proportion of home loans that can be lent at high multiples of income has been proposed.

The plan was outlined by the Bank of England as governor Mark Carney said the housing market could be a threat to the UK economy's stability.

Under the proposal, lenders will not be allowed to lend any more than 15% of residential mortgages at more than 4.5 times a borrower's income.

Affordability checks on borrowers will also be strengthened.

The Bank's Financial Policy Committee (FPC) has a remit is to tackle any threat to the stability of the UK's economy and the measures aim to prevent the housing market getting out of control in the future.

The key recommendations are:

The Bank said that the plans would not have an immediate effect on the current housing market, and would not suddenly harm a potential buyer's ability to get on the property ladder.

"These actions will have a minimal impact in the future if, and it is an important if, if the housing market evolves in line with the bank's central view," Mr Carney added.

Mr Carney said that the Bank was acting in a proportionate and graduated way, acting early, and putting in place "a fire-break" on riskier lending.

Lenders said this cap would have an impact primarily in London.

"Nationally, 9% of new loans are at 4.5 times income or more, but the figure is 19% in London," said Paul Smee, director general of the Council of Mortgage Lenders.

However, Mr Carney said the 15% limit could be reached nationally within a year.

Some lenders, notably Lloyds Banking Group and RBS, have already limited mortgage lending to four times income for loans worth more than £500,000. The average new mortgage for a house purchase is £135,200.

The action by Lloyds and RBS was specifically aimed at curtailing "inflationary pressures" in the London housing market.

The latest official figures on the housing market showed an annual property price increase of 18.7% in London, where a small proportion of buyers pay in cash.

It is highly unlikely that these [constraints on lenders] will have any significant impact on the health of the housing market in any part of the UK, including the booming markets in London and the South East”

Excluding London and the South East of England, the cost of a home was 6.3% higher in April than 12 months before, the Office for National Statistics (ONS) said last week.

But various surveys have suggested that the heat might be coming out of the market, with mortgage approvals - a sign of future sales - having slowed in recent months. Some areas outside of London and the South East have seen relatively little increases in activity among buyers and sellers.

This will be added to, under the Bank of England's plans, as lenders will need to assess if borrowers could still afford to repay their mortgage if interest rates were three percentage points higher, during the first five years of the term, than at the time the loan was approved. 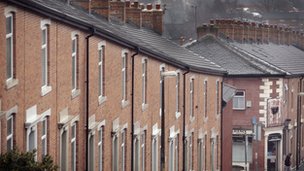 Mortgage brokers said that relatively few people would be affected by these changes.

Mr Carney said the threat to economic stability was not imminent, but lending could turn from responsible to reckless very quickly.

In light of the bank's move, the government has said that no applicants for the government's Help to Buy scheme would be able to borrow at more than four-and-a-half times their income.